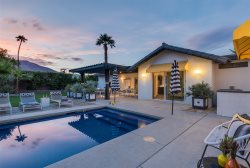 With wonderful neighborhoods like Sunmor and Sunrise Park, Central Palm Springs is prized for it's "residential" feel but still is just minutes from downtown and her shops and restaurants. Old, architectural wonders reside next to elegant new homes in discreet neighborhood planning.

SUNMOR is a well-known central Palm Springs neighborhood comprised of a remarkably intact collection of mid-century homes built in the late 50s and early 1960s. The neighborhood is bordered by Palm Springs City Hall and the International Airport on the east, Farrell Drive on the west, and East Tamarisk and Andreas Road to the north and south respectively. The two primary builders of Sunmor houses were locally prominent builder Robert Bob C. Higgins and the nationally prominent team of Robert Alexander and his father, George Alexander, of the Alexander Construction Company. Over the years a number of minor Hollywood celebrities have called the Sunmor neighborhood home. However, the neighborhoods most famous resident was most certainly the outspoken cowboy mayor Frank Bogert (1910-2009). Bogert served four terms as the citys mayor from 1958-1966 and from 1982-1988 and was the author of two books that chronicled the early history of Palm Springs. Two cul-de-sacs in the Sunmor neighborhood have the distinction of being named after members of the Alexander family, i.e., Helene Alexander (Helena Circle) and her daughter Jill (Jill Circle). There is more information to be found on the (very active) neighborhood associations web page.
View Category

Sunrise Park is a charming and well-kept neighborhood, centrally located and just minutes to downtown. Between Alejo and Amado, Sunrise to Farrell, its great for walking tours and incredible examples of mid-century architecture. During modernism week, its this neighborhood tour is a quick sell out! With an active neighborhood organization, youll know what its like to live like a local here.
View Category

Relax and revel... You have found your Bliss!

Relax and revel... You have found your Bliss!

MID-CENTURY STYLE, MODERN UPDATES AND A BACKYARD THAT IS EVERYTHING!

MID-CENTURY STYLE, MODERN UPDATES AND A BACKYARD THAT IS EVERYTHING!

Jump to a Rental